From rude to required: Tweeting at meetings is now en vogue

There have been quite a few high-profile Tweeting events recently – notably the Oscars, the Super Bowl, and ASAE’s Technology Conference (of course!). What I’ve noticed from these events is the power of Twitter to foster dialogue among interested parties and further the discussion beyond the podium or the playing field.

Monitoring the number (and nature) of the conference Tweets piling up, in both general sessions and breakout presentations, it became clear to me during #Tech12 that merely sitting and taking it all in is no longer de rigueur at such meetings; one is expected to join the discussion! 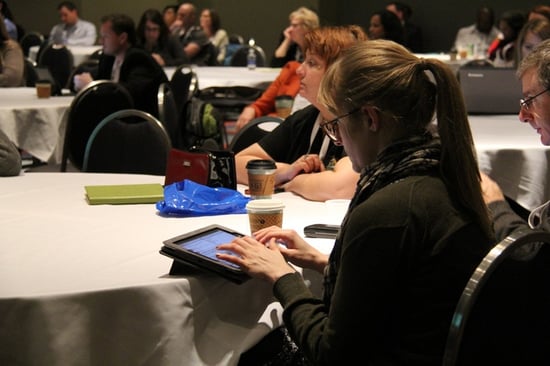 I find this interesting, as there once was a time, not so long ago, when someone who was found in the "Blackberry prayer position" (i.e., hunched over their device in a moment of silent reflection and/or furious thumb-typing) was exhibiting bad manners and patently engaged in something elsewhere instead of paying attention to the speakers. That breach of social etiquette has reversed! Now, if you are not interacting with your personal device – be it a smartphone, tablet, or even the less-progressive laptop – you are not fully engaged in the dialogue.

I confess that I am a serial Tweeter under such circumstances. The ideas being conferred on stage, as well as those expressed by fellow Tweeters, can be quite thought-provoking. And some of the Tweets – often in the form of questions – are tantamount to the notes I might otherwise be taking during such presentations. The key difference is that now those notes are shared with others – not only those who are following a conference Twitter feed, but also my followers (and even beyond there, if my musings get re-Tweeted). Another benefit that flows from such occasions is the chance to gain new followers, as well as people to follow.

Where do you stand on the matter? Are you a meeting Tweeter or someone who would rather devote your full attention to what’s going on up front? When someone trips on stage, do you run to their aid or dash to dish on Twitter?